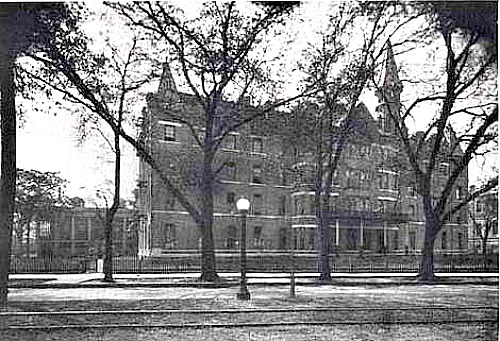 In 1869, with the support of the Missionary Association of the Congregational Church (now the United Church of Christ) and the Freedman’s Aid Society of the United Methodist Church, Straight University and Union Normal School were founded. Later, they were renamed Straight College and New Orleans University, respectively.

Gilbert Academy, a secondary school, was a unit of New Orleans University. Straight College operated a law department from 1874 to 1886. New Orleans University in 1889 opened a medical department, including a school of pharmacy and a school of nursing. The medical department was named Flint Medical College and the affiliated hospital was named the Sarah Goodridge Hospital and Nurse Training School. The medical college was discontinued in 1911, but the hospital, including the nursing school, was continued under the name Flint Goodridge Hospital.

In 1930, New Orleans University and Straight College merged to form Dillard University. The trustees of the new university called for the implementation of a coeducational, interracial school, serving a predominantly African American student body adhering to Christian principles and values. The university was named in honor of James Hardy Dillard, a distinguished academician dedicated to educating African Americans.

Dillard students continue to excel academically, winning major awards such as the Luard Scholarship and gaining placement in prestigious graduate programs throughout the nation.

Today, as in earlier years, graduating seniors gather to repeat the time-honored tradition of walking down the Avenue of the Oaks to their graduation ceremony and their future, girded with a Dillard education.

The university houses several endowed chairs and a strong list of senior vice presidents, including a provost, the first in the university’s history. A major realignment of academic units has created two colleges, the College of Arts and Sciences, and the College of Professional Studies, to better serve students' need in today's growing global economy.

With 141 years of academic excellence to its name, Dillard University continues its historical commitment to excellence in education and strives to position itself as one of the nation’s premier centers for undergraduate research.