A Brief History of Dillard University 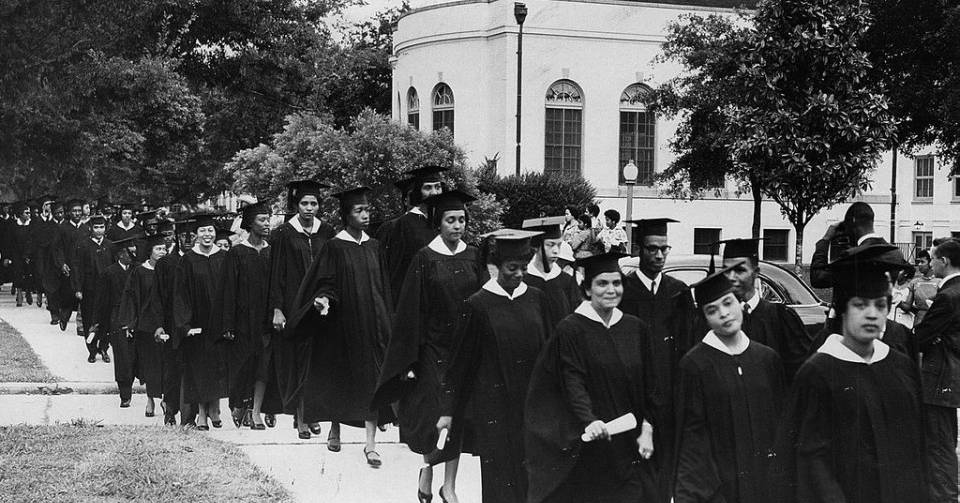 The procession of Dillard University graduates to the school's chapel. Graduating students traditionally proceed down the school's Avenue of the Oaks.

In 1869, with support from the American Missionary Association of the Congregational Church (now the United Church of Christ) and the Freedmen’s Aid Society of the Methodist Episcopal Church (now the United Methodist Church), Straight University and the Union Normal School were founded. They were subsequently renamed Straight College and New Orleans University, respectively. Gilbert Academy, a secondary school, was a unit of New Orleans University.

In 1889, New Orleans University opened a medical department, including a school of pharmacy and a school of nursing. The medical department was named Flint Medical College and the affiliated facility was named the Sarah Goodridge Hospital and Nurse Training School. The medical college was discontinued in 1911, but the hospital, including the nursing school, was continued under the name Flint-Goodridge Hospital. Straight College operated a law department from 1874 to 1886.

In 1935, New Orleans University and Straight College merged to form Dillard University. The trustees of the new university called for the implementation of a coeducational, interracial school, serving a predominantly African American student body adhering to Christian principles and values. The university was named in honor of James Hardy Dillard, a distinguished academician dedicated to educating African Americans.

Dillard trustees elected to continue the work of the hospital but not that of Gilbert Academy. The latter continued operation as a separate institution under the sponsorship of the Board of Education of the Methodist Church until 1949. The university operated Flint-Goodridge Hospital of Dillard University from 1932 until 1983.

Will W. Alexander was chosen to be the acting president of Dillard University. He served from 1935 to 1936. At the time of his appointment, he was director of the Commission on Interracial Cooperation (CIC), which actively campaigned against lynching and conducted research studies of issues pertaining to “Negro welfare” and other Southern “problems.”

A new era began with the appointment of William Stuart Nelson as Dillard’s first president in 1936. A noted educator and administrator in higher education, Nelson became the first African American to lead the institution. During his four-year tenure (1936-1940), Nelson took to heart the missionary ideal of liberal arts education in a manner that would leave a lasting impression on the university’s curriculum. He was instrumental in the implementation of a major arts festival. The gathering created a venue for local artists and national figures to enjoy and debate the nature of African American art – past, present and future. Nelson sought to foster a sense of “cultural enlightenment and participation.” His dedication to the arts laid the foundation for a tradition at Dillard that extends to the present day.

In 1941, Albert W. Dent was named the university’s second president. Prior to this appointment, Dent served as the university’s hospital administrator. Although he had not earned an advanced degree, Dent proved himself to be a remarkable president and an effective leader in the international field of health administration during his 28-year tenure. He guided Dillard through the challenging decades of World War II, the Civil Rights Movement and the Black Power movement. During his presidency, Dillard became the first and only university with an accredited nursing program in Louisiana.

The appointment of Broadus N. Butler, a Southern intellectual, as the university’s third president marked a renewed commitment to the liberal arts. Butler’s most important contribution to the university’s intellectual life was the implementation of the Scholars-Statesman Lecture Series, housed in the Division of Social Sciences. The lecture series brought to campus key figures in education, the arts and law, including educator and scholar Benjamin Elijah Mays, actress Etta Moten Barnett, artist Aaron Douglas, Harlem Renaissance writer Arna Bontemps and Pennsylvania jurist A. Leon Higginbotham, Jr. Butler resigned in November 1973 after the board of trustees realized the need to transform its curriculum to meet the needs of the changing student body. Such changes clashed with Butler’s ideal of a traditional, classical education. Myron F. Wicke served as acting president until 1974 when Samuel DuBois Cook became the university’s fourth president.

Under the leadership of Samuel DuBois Cook, Dillard’s curriculum was strengthened and expanded and the number and percentage of faculty members holding doctoral degrees was increased. During his tenure, Cook raised the requirements for admission, increased student enrollment by 50 percent, raised significant funds to improve the campus and facilities, and expanded student services. In 1989, Cook created the Dillard University National Conference on Black-Jewish Relations from which sprang the Dillard University National Center for Black-Jewish Relations. He added the Japanese studies program in 1990.

On July 1, 1997, Michael L. Lomax was named the fifth president of Dillard University. A noted scholar, administrator, political leader and entrepreneur, Lomax undertook the challenge to transform Dillard University into one of the finest liberal arts colleges in the nation. Lomax led an aggressive campaign to renovate and modernize campus facilities. In spring 2004, construction was completed on the Dillard University International Center for Economic Freedom (DUICEF).

On July 1, 2005, Dr. Marvalene Hughes began her tenure as the sixth and first woman president of the university. She was soon faced with the challenges of Hurricane Katrina. After weathering the storm with grace and dignity, she began to guide Dillard through its transformation toward new heights. With unwavering determination, Dr. Hughes facilitated the rebuilding of Dillard’s historic, 55-acre campus, which lost more than $400 million to physical damage and business interruption. In the first year of Hughes’ tenure,   and again in 2006, the university raised more than $34 million in public and private gifts and grants, far exceeding any previous annual total in Dillard’s history.

During the summer of 2010, President Hughes announced an academic restructuring of the university under a new four-college system with 22 majors that will position Dillard to capitalize on future growth opportunities. The College of General Studies – designed as a two-year gateway program for all incoming freshmen to improve graduation rates, enhance preparation for majors, and foster kinship among students – now stands alongside the College of Arts and Sciences, the College of Professional Studies, and the College of Business.

Dr. Hughes transitioned from the presidency in June 2011, and Dr. James Lyons came on board as interim president. He inherited a thriving institution. Fair Dillard has reaffirmed its commitment to education, community, excellence and heritage. The university has positioned itself for success throughout the 21st century, and it will continue to educate the bright, young leaders of tomorrow.

On July 1, 2012, Dr. Walter Kimbrough became the seventh president in the history of Dillard University. Known as the “Hip-Hop Prez,” he has demonstrated a commitment to emerging higher education trends, social media and, above all, the youth of today.