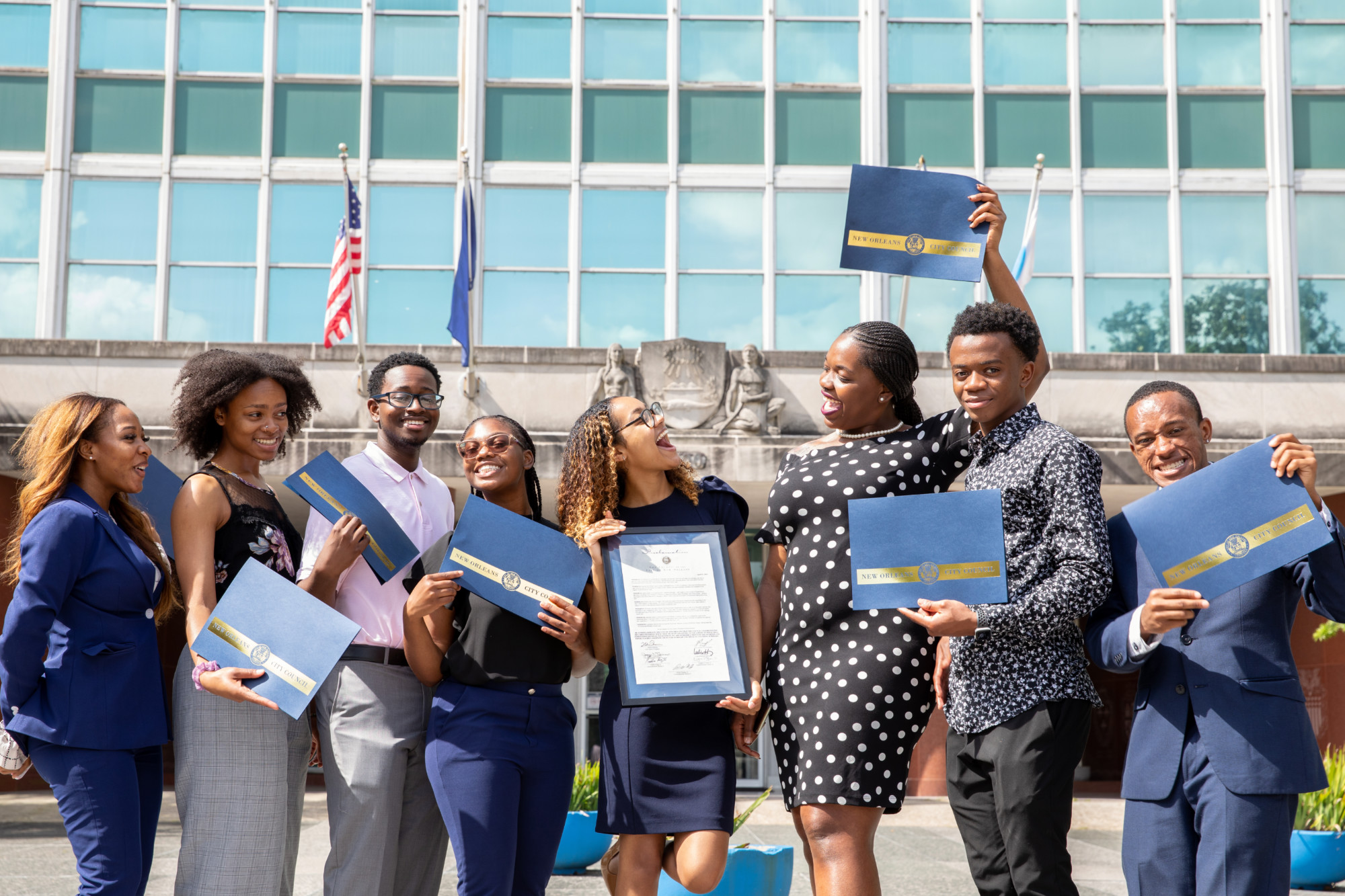 Members of the Dillard University Mock Trial Team celebrate outside of the New Orleans City Hall after receiving their proclamation for making it to the American Mock Trial Association National Championship Tournament. Photo: Sabree Hill/Dillard University.

Each episode that featured Dillard Mock Trial included sobering commentary on what it is like to be one of a handful of HBCUs competing in the high-pressure world of mock trial. Episode 5 focuses on the team's recovery from Hurricane Ida in the midst of preparing for the '21-'22 season. In the same episode, Shelton provides thoughts on being labeled as an "aggressive" competitor. Episode 9 sees the team competing for a spot at the American Mock Trial Association regional tournament while focusing on the stories of Bell and Douglas, who speaks candidly about the fight for social justice in her hometown of Shreveport. The podcast concludes with episode 12 where the team competes at the AMTA's national tournament--the only other HBCU besides Howard University. Listeners also hear thoughts from Ronczyk as she prepares for life as a Harvard Law School student.

“Class Action” focuses on how teams' preparation for competition while also pulling listeners into a deeper discussion about the importance of advocacy and preserving America’s democracy through trial law with a more diverse nation of attorneys. It is the mission of Dillard’s pre-law program, of which the mock trial team is a part, to diversify the legal profession.

Kevin Huffman, who produced “Class Action” with Lisa M. Gray, found both Bell and Shelton to be compelling figures. “DeAndré is just so bright and engaging,” Huffman said. “He has a curious mind and is a dynamo in the courtroom.” Huffman continued, “Lajeanne is, to me, a lion–just strong and fierce and bursting with energy. She is a natural leader and truly loves mock trial. She is well known within the undergrad mock trial community.”

“Class Action” also features teams from the St. Mary’s University School of Law, the University of South Dakota Knudson School of Law and Brooklyn Law School, making Dillard the only undergraduate team featured on the podcast. “Class Action” was produced by Sound Argument, LLC and it is hosted by Katie S. Phang, host of the “The Katie Phang Show” on MSNBC and Peacock.

“Class Action” is available on iHeartRadio, the number one podcast publisher according to Podtrac. It is also available on Spotify, Apple Podcasts and other major podcast platforms.

Dillard University is a historically Black institution that cultivates leaders who live ethically, think and communicate precisely, and act courageously to make the world a better place. Located in New Orleans, Dillard is a private faith-based liberal arts university that offers 22 majors and two certificate programs. Founded in 1869, Dillard is Louisiana’s oldest HBCU, born from the union of Straight College and New Orleans University. Find out more by visiting www.dillard.edu.