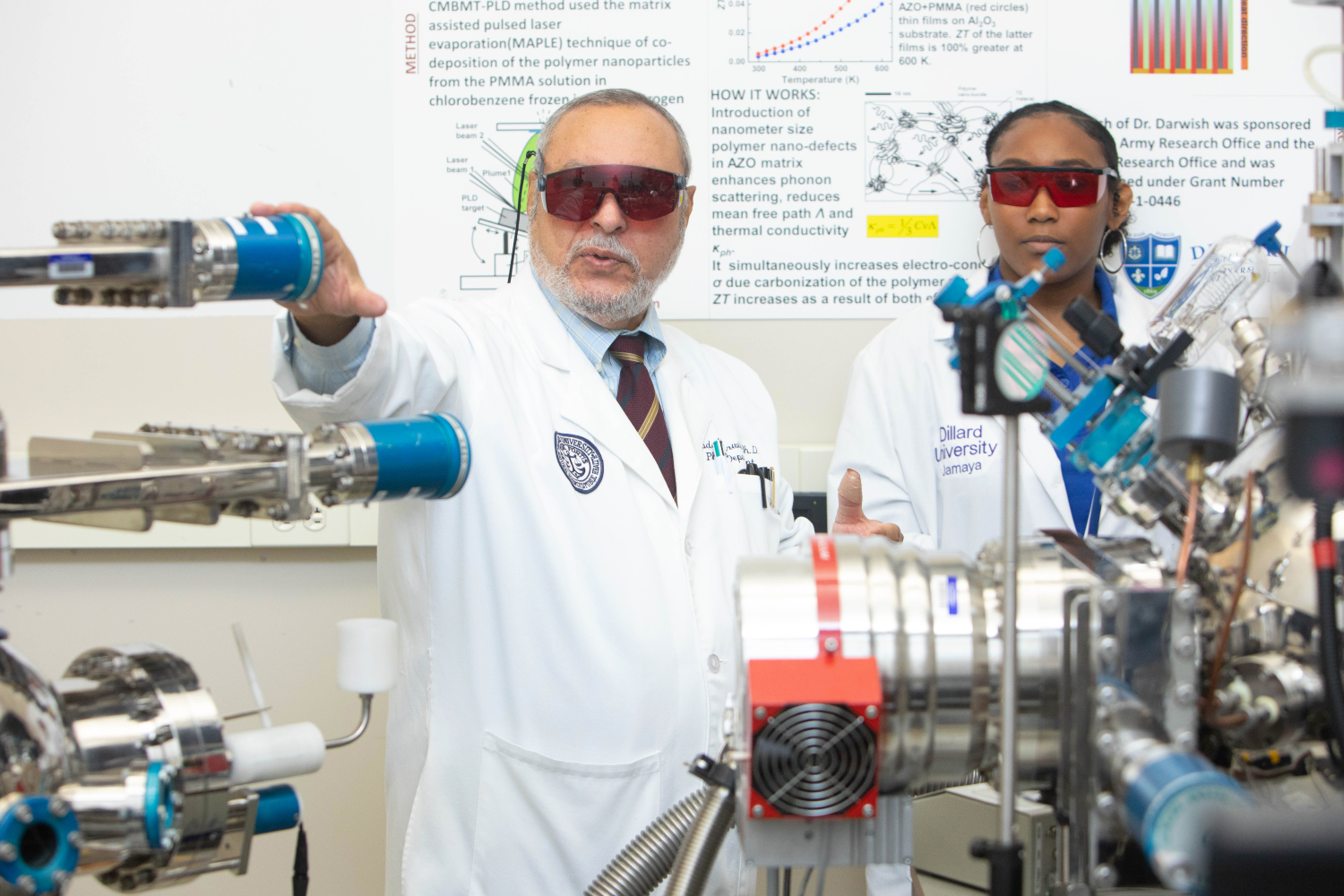 NEW ORLEANS – Dillard University’s presidential professor Dr. Abdalla Darwish has been awarded a third patent by the United States Patent and Trademark Office for his invention of the multiple beam pulsed laser deposition of composite films. Darwish’s invention relates to a system and method for multiple beam laser deposition of thin films wherein separate laser beams are used to ablate material from separate targets for concurrent deposition on a common substrate. This enables homogenous-in-situ  mixing of three different materials at the state of plasma to form a new nanocomposite thin film.

The targets may include, but are not limited to polymers, organics, inorganics, nanocrystals, solutions, or mixtures of materials. A target may be disposed on a tiltable mount to adjust the direction of the ablation plumes. Multiple ablation modes may be concurrently employed at the various targets, including, but not limited to pulsed laser, MAPLE, IR-MAPLE, and other modes.

“These patents will position the Dillard University physics department to be more competitive in international nanocomposite film fabrication research and give our students the opportunity of hands-on -training  on topnotch research and technology of fabrication of flexible devices and other applications,” Darwish shared in a statement.

The invention may include a camera and processor for plume axis determination and feedback control of the plume axis by controlling a tilt of a target holder. MAPLE target loading sequences and liquid states are described. Fluorescent image monitoring is described. The invention is a result of the research supported by multiple grant awards from the Air Force Office of Scientific Research (AFOSR) and Army Research office. “Professor Darwish's inventions take the industry of thin film fabrication to a new dimension and are great for Dillard and for the scientific community.  Professor Darwish's continued success is a clear indication of Dillard’s commitment to research and will have lasting benefits for the university,” Theodore Callier, assistant vice president of the Office of Research and Sponsored Programs said.

Dillard University is third top producer of physics bachelor's degrees awarded to African Americans according to the American Institute of Physics. The University is a premier private undergraduate university in the region and in the world of Historically Black Colleges and Universities. The designation of physics as a signature program adds to that tradition of excellence. True to its motto Ex Fide Fortis, meaning "strength from faith," Dillard is positioned for success throughout the 21st century and beyond.

Dillard University is a historically Black institution that cultivates leaders who live ethically, think and communicate precisely, and act courageously to make the world a better place. Located in New Orleans, Dillard is a private faith-based liberal arts university that offers 22 majors. Founded in 1869, Dillard is Louisiana’s oldest HBCU. Find out more by visiting www.dillard.edu.