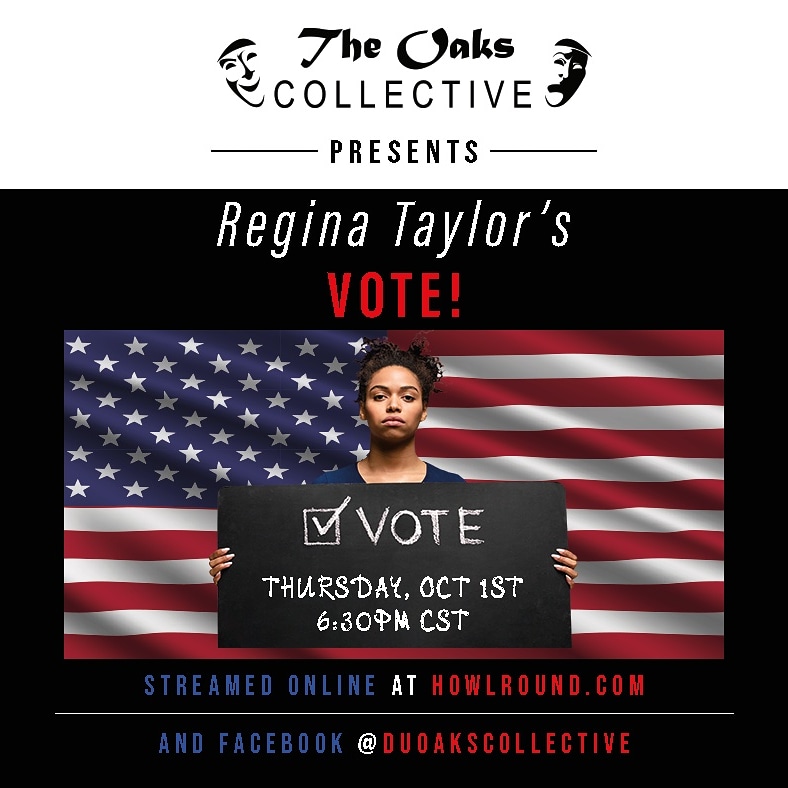 A group of Dillard alumni are using the talents they honed on the stage of Cook to encourage voters to take action during the 2020 presidential election. The Oaks Collective is a group of Dillard Theatre alumni who will present Regina Taylor’s “VOTE!” October 1, 6:30 p.m., central time. The virtual event will stream live on HowlRound.com; and will be hosted by Felicia Fitzpatrick, social media director for Playbill and the host/creator of the "Call and Response" podcast.

Members of the Oaks Collective decided to form the group after noticing that voices of color remain underrepresented and underappreciated in the arts according to Khalilah Elliott ‘00. “It's both frustrating and inconceivable to us since we know how much good work is out there waiting to be produced. As friends, we've talked for years about simply putting out that work ourselves,” says Elliott who is the founder and “chief disruptor” of Gadford Communications, a marketing firm.

After a few conversations, Elliott says, the group decided to form as independent producers. The Oaks Collective also consists of Nina Domingue-Glover '98, Jamal Sterling '99, D. Wambui Ricardson '00 and Clifton Harvey '01. The fit is natural for the group as Elliott fondly recalls, “Dillard instilled in us the idea that our stories, our lived and shared experiences as Black folks mattered.”

Their first project, which took place in April 2020, was well-received by viewers, says Elliott. “We have been quite taken aback by the overwhelmingly positive response to both our inaugural project ‘The Renaissance’ and in the interest around our upcoming project...‘VOTE!’ being produced in collaboration with Golden Globe winning actress, playwright and director Regina Taylor. In both instances, we set out to do work that spoke directly to our community of Black people and theater lovers and we've been grateful that both projects have not only been very well received but have also opened up more opportunities for us to continue to bring engaging work to audiences.” It was the connection of the alumni that led them to Taylor.

Call it serendipitous; Taylor had been looking for a way to add to the national swell of voices encouraging young people to vote and the Collective had been having a similar conversation. From there, all of the artists teamed up to source materials from playwrights between the ages of 18 and 25 with a focus on HBCU students and alumni. From there, Taylor curated and directed the works.

Projects like “VOTE!” are just what the doctor ordered for artists like the Collective according to Elliott. COVID-19 is the obvious culprit. “Sadly, most of us in the live performing arts scene are on hiatus and in limbo as we wait for it to be safe to return to the theater again,” she says. The light at the end of the tunnel is that live theater is expected to resume in early 2021 according to a Collective member who sits on a theater task force.

The pain caused by the pandemic has strengthened the resolve of the artists to not only keep performing but to also make an important civic statement. With that, the performances of Regina Taylor’s “VOTE!” will be followed by a panel discussion which will include:


Proceeds from the event will benefit the NAACP Legal Defense Fund and the UNCF. For more information, go to the Oaks Collective website. The group is accepting donations for the event.