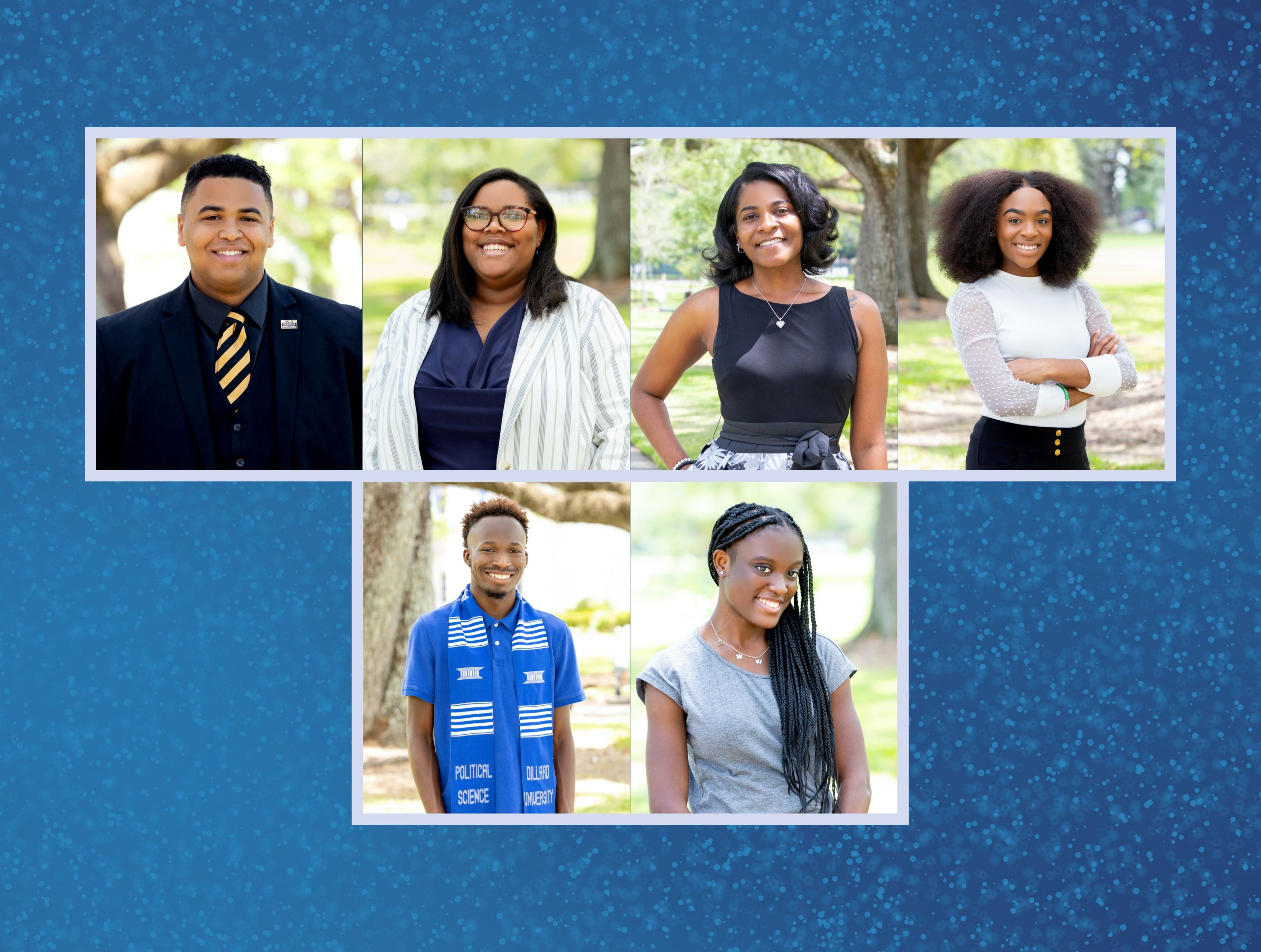 NEW ORLEANS—Chad Fuselier ‘22, Brinisha Hamilton ‘22, Nadia James ‘22 and Iman Wells ‘22 have received the distinction of valedictorian, and Priscilla Saarah ‘22 and Jermany Gray ‘22 have received the distinction of salutatorian for the Dillard University class of 2022. The students will lead their class, composed of 202 students, during the University’s 86th Commencement exercise on Saturday, May 14, 8 a.m., on the Rosa Freeman Keller Avenue of the Oaks on the Gentilly campus.

Fuselier, a Lafayette, Louisiana native, will receive his Bachelor of Science in accounting, with plans to pursue a career as a tax attorney. He is a member of Alpha Phi Alpha Fraternity Inc. where he serves as president, treasurer and financial secretary for Beta Phi Chapter. Fuselier serves as president, liaison and parliamentarian for the Daniel C. Thompson/Samuel DuBois Cook Honors Program and captain of the Honda Campus All-Star Challenge team. He is also a member of the President’s Organization of Dillard’s Up-and-Coming Superstars (PODUS) and Dillard’s L.E.A.D. Program. Fuselier received a full scholarship to attend the University of Florida’s Levin College of Law.

Hamilton, born and raised in New Iberia, Louisiana, will receive a Bachelor of Arts in English and a minor in mass communication, with plans to become a published author. Hamilton is a member of the Daniel C. Thompson/Samuel DuBois Cook Honors Program, the English Club and Sigma Tau Delta International English Honor Society. Hamilton has been a recipient of the Presidential Scholarship for the past four years. She plans to attend graduate school within the next five years.


James, a New Orleans native, will receive a Bachelor of Science in criminal justice. She is a member of Alpha Phi Sigma, and sits on the advisory board for Dillard’s Center for Racial Justice. While obtaining her associate’s degree from Nunez Community College, James became a member of Gamma Beta Phi and Phi Theta Kappa. During her time at Dillard, she balanced being a single mother of one, a full time student and a full time employee. James is earning her degree, thanks to Dillard’s Evening and Weekend Studies Program, which offers highly flexible and affordable degrees to students who attend college in a non-traditional capacity. The graduating senior plans to further her education to pursue a dual degree in both law and social work.


Wells, a Baton Rouge, Louisiana native, will receive a Bachelor of Arts in theater arts with a concentration in performance. Wells is a member of the Daniel C. Thompson/Samuel DuBois Cook Honors Program, Alpha Psi Omega Theater Honor Society, Alpha Chi National Honor Society, Alpha Kappa Mu Honor Society and the Beta Upsilon Chapter of Alpha Kappa Alpha Sorority Inc. Wells is also a former member of:  the Vision Quest Choir; Curvy Girlz, a student-led women’s empowerment organization; and Sister2Sister, a student-led organization that promotes healthy relationships amongst women on campus. Upon graduating, Wells plans to attend graduate school, while also doing things that she’s passionate about, like performing and teaching. The graduating senior was offered a scholarship to Emerson College to continue her education.


Each valedictorian earned a 4.0 final grade point average. The valedictorians will receive the Benjamin E. Mays - Samuel DuBois Cook Presidential Scholarship, which is a $750 award presented annually to the top graduating seniors who have maintained an exemplary academic record.


Gray, a political science major born and raised in Jackson, Mississippi, earned a 3.978 final grade point average. He’s a member of Pi Sigma Alpha Political Science Honor Society, Alpha Beta Theta Chapter and the Daniel C. Thompson/Samuel DuBois Cook Honors Program. Gray is the recipient of the University Scholarship. He serves as senior class representative for the Student Government Association (SGA); senior advisor for Haus of Pride and the Political Science Society. Upon graduating, Gray will pursue a master's degree in public administration from Jackson State University. Gray attributes his success to his mother who passed away in September.

Saarah, a Kumasi, Ghana native and biology major-chemistry and computer science minor, earned a 3.978 final grade point average. Saarah received a full scholarship to complete her undergraduate degree at Dillard. She’s the recipient of the Generation Google Scholarship Award, the University Scholar Scholarship and the Freshman Presentation Award. Saarah is a member of Dillard’s Honors Program and the Pre-Med Club. She is an Extreme Science and Engineering Discovery Environment Student Champion (XSEDE). Since her freshman year, Saarah has collaborated with assistant professor of biology, Dr. Michael Rowe, on an elephant biomechanics project. The findings for the project are tentatively scheduled to be published during the summer. While balancing a full academic schedule, Saarah held several internships: the Distributed Research Experience for Undergraduates (DREU), where she worked on a robotics project and a computational biology project; and the University of Mississippi Medical Center Summer Undergraduate Research Experience (SURE), where she worked in a neuroscience/obstetrics lab. The graduating senior plans to attend medical school, where she will focus on neurosurgery.

The salutatorians will receive the Michael L. Lomax Presidential Scholarship, which is a $500 award presented annually to the salutatorians of the class for having maintained an exemplary academic record.

Dillard University is a historically Black institution that cultivates leaders who live ethically, think and communicate precisely, and act courageously to make the world a better place. Located in New Orleans, Dillard is a private faith-based liberal arts university that offers 22 majors and two certificate programs. Founded in 1869, Dillard is Louisiana’s oldest HBCU, born from the union of Straight College and New Orleans University. Find out more by visiting www.dillard.edu.