The “Cachinbona” Life of Flor Martinez in New Orleans 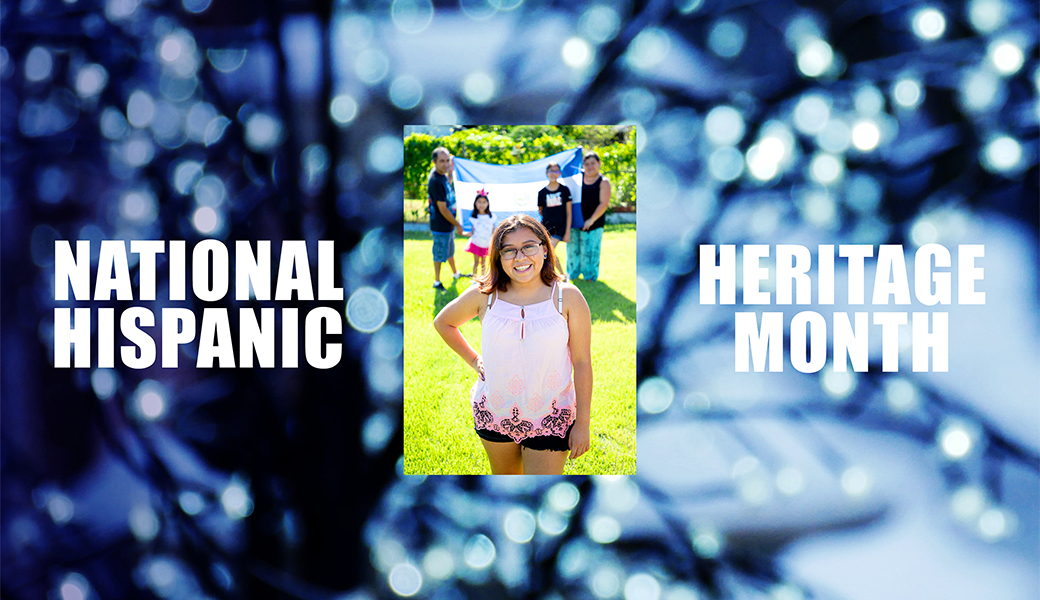 The “Cachinbona” Life of Flor Martinez in New Orleans

New Orleans, known for its French flair, has been heavily influenced by Spanish and Latin American culture. Starting from the 17th century, France gave Spain control of its New Orleans colony and Louisiana territory from 1763 to 1803 after the Battle of Signal Hill to pay off its war debt. During those 40 years, Spaniards migrated to the colony with their families and rebuilt much of the French Quarter that had been previously damaged by fires. Centuries later, after Hurricane Katrina, New Orleans received an influx of Latin American immigrants that helped rebuild the city after the catastrophic natural disaster. In 2014, it was noted that New Orleans had the largest population of Honduran-Americans, El Salvadorans and Belizians in the United States. To celebrate National Hispanic Heritage Month and the contributions of Latin Americans in New Orleans, Dillard University’s Office of Communications and Marketing interviewed Flor Martinez, a junior Visual Arts major about her migration narrative from El Salvador, life in New Orleans and social issues that impact Latinas in the Big Easy.

Dillard University (DU): Why did you decide to enroll in an HBCU?

Flor Martinez (FM): I decided to come to an HBCU because I wanted to [share] my culture with African Americans because some might question where EL Salvador is. Also, I’ve [learned that] Africans-Americans relate to Latinos because both are seen as a [minorities].

DU:What is El Salvador like? Describe your childhood and your American migration journey.

To move to a city where no one sleeps was a big impact for me. I remember seeing the big buildings and lights around me and people walking with no fear, I was surprised. When I first went to middle school, I was scared because I had to learn a new language and [I remember] asking a Indian girl “¿Hablas español?” (Do you speak Spanish?) and she said no. I was mad and sad because she didn’t want to help me [learn English]. Then, my teacher put me next to another girl because she knew a little Spanish, but honestly, she didn’t help me at all. The next day she put me next to this girl who spoke fluent Spanish and I was happy. Finally [I felt like] I had a friend and again, she didn’t help. The next day I told my parents that I was sick--that was a lie. I didn’t feel comfortable with anyone. I couldn’t fit in with anyone until I met a Chinese girl. She was like me.  We were learning English at the same time and we became close friends. We pushed ourselves to learn English, so we could communicate more.

FM: If you are a teenager (of Latino heritage) in New Orleans, [you may not be attached] to it.

[Whereas] if you are an adult, you still [continue the traditions] from your country. For example, El Salvadorans drink coffee with sweet bread at 4 p.m. with their family or neighbor(s). [Another example] is having a piñata outside and feeling like home. However, if you are a child or young adult you may try to fit in so hard with a particular group outside of your culture. [You or someone close to you has to remind you of your culture and traditions]. A personal example of this: my youngest sister who is now six years old,was born in New York City. My mom kept our culture [prevalent], especially [through] food and the language (Caliche).  Now, my sister is six and she uses some words that people in my country use such as “bichito (little kids)” and she loves pupusas (El Salvador’s typical food).

FM: I am not going to talk about racism towards Latinos because we can see it in other places besides New Orleans. You can see racism [all over] our country. I am going to talk about something that hurts me more than someone yelling at us “Speak English this is ‘America.’” I am going to talk about young Latinas between the ages of  15-17 who dropout of school because they get pregnant by Latino men who are twice their age. Instead of keeping [up with] their education some Latinas come to United States and they choose to be lazy because English is too hard for them. I understand English can be hard but it is not an excuse for quitting something that can bring you a lot of opportunities. [Especially if your only option is to] stay at home, serving a husband who might treat you bad because that is how some Latino men are.

In my own experience, I have dealt with Latino men (who are between the ages of  27-30) asking me: “¿Tienes marido?” (Do you have a husband?), “¿Vives con tu marido?” (Do you live with your husband?), “¿Tienes hijos?” (Do you have kids?) and it aggravates me because some young Latinas [continue the cycle] of allowing it to be socially acceptable for older men to ask stupid questions about maridos (marriage) and hijos (children). [Whereas] a young woman, like me, may be seen as unusual if she is one out of the twenty-three percent of the young Latinas who choose education before maridos.

Also, some young Latino males in New Orleans are apathetic towards their academics and get stuck with the mindset of “I do whatever I want” and they play this role of “machismo” since their parents allow young boys do whatever they want because their are men. This makes it seem that the stereotype “Latinos are lazy” is true because of the behavior from a small group of people.

DU:What does culture and heritage mean to you?

FM:My culture and heritage means that [even though] I might be different from someone else, I can [teach] people about El Salvadoran culture. I am proud of who I am and even my accent that comes out when I speak English. At first, I was not proud of my Salvadoran roots because I didn’t see how I could be  proud of a country known for homicides and other acts of violence, especially domestic violence. However I now choose to see my culture as something positive and the people that I have met in my life taught me about [the duality of culture]. I would love to thank Dillard’s Endowed Professor of English Dr. Mona Lisa Saloy; without her I would have been lost and not push myself to see the beauty of being from El Salvador and what my culture truly means.

DU:What are the top five things you miss about home (your country)?

FM: The top five things I miss about El Salvador are: 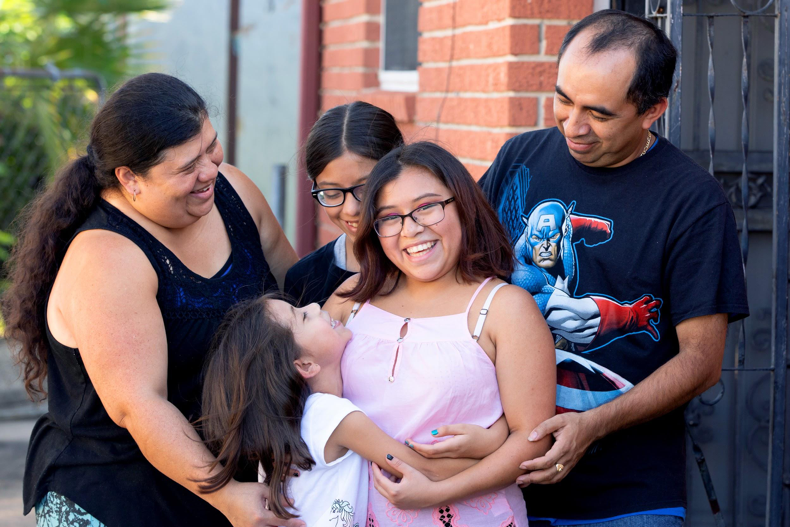 Flor Martinez poses for a photo with her mother Flor de Martinez, sisters Jazmin Martinez and Emely Martinez and father Jose Martinez in front of their New Orleans East home on September 22, 2019. "Most of the things I do are with my family," said Martinez. (Photo by Sabree Hill/ Dillard University Photographer) 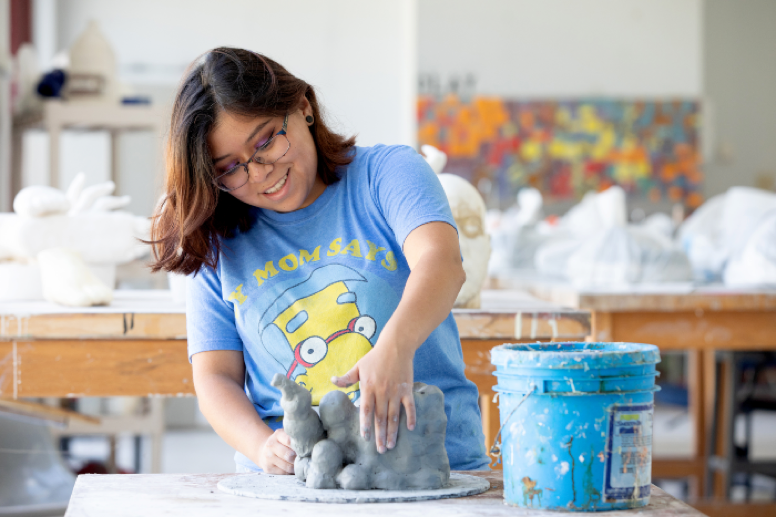 Photos 1-10 – Flor Martinez, a Visual Arts Major, works on a sculpture of a heart at Dillard University on September 13, 2019. “Art for me, being Latina, is stepping outside of the box for my culture. I am choosing to be who I am and what I really like,” said Martinez. (Photo by Sabree Hill/ Dillard University Photographer) 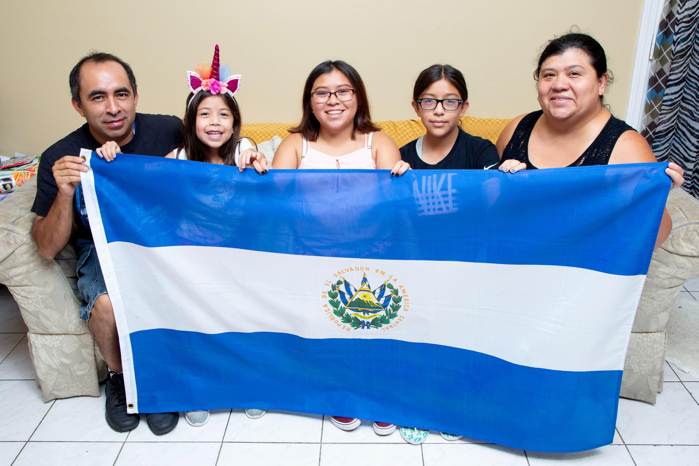 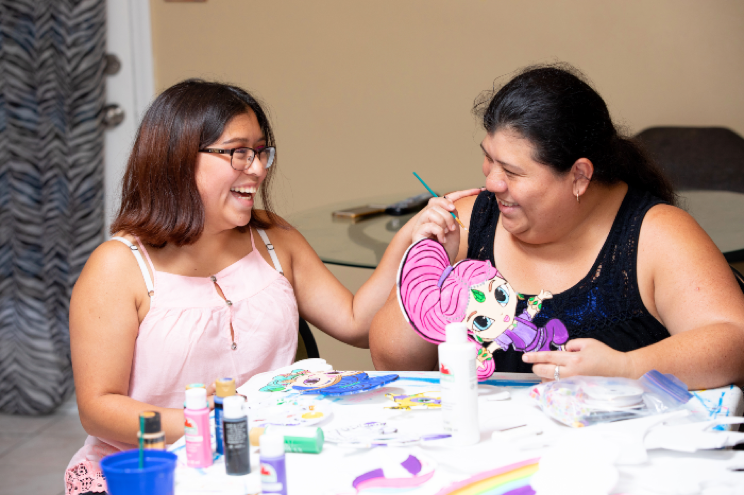 Flor Martinez and her mother Flor de Martinez laugh together as they work on crafts in their home on September 22, 2019. "My mom is my best friend," said Martinez. (Photo by Sabree Hill/ Dillard University Photographer)

Supporters provide more than $780,000 for GivingTuesday

Allen:  Disparities due to institutional racism

Clark:  A Lesson Before November

Pittman '24:  Three Types Of Misinformation In This Election And How We Can Fight It