Note: The Sunday, October 16 production has been moved to 6 p.m.

BUY TICKETS ONLINE OR PAY CASH AT THE BOX OFFICE 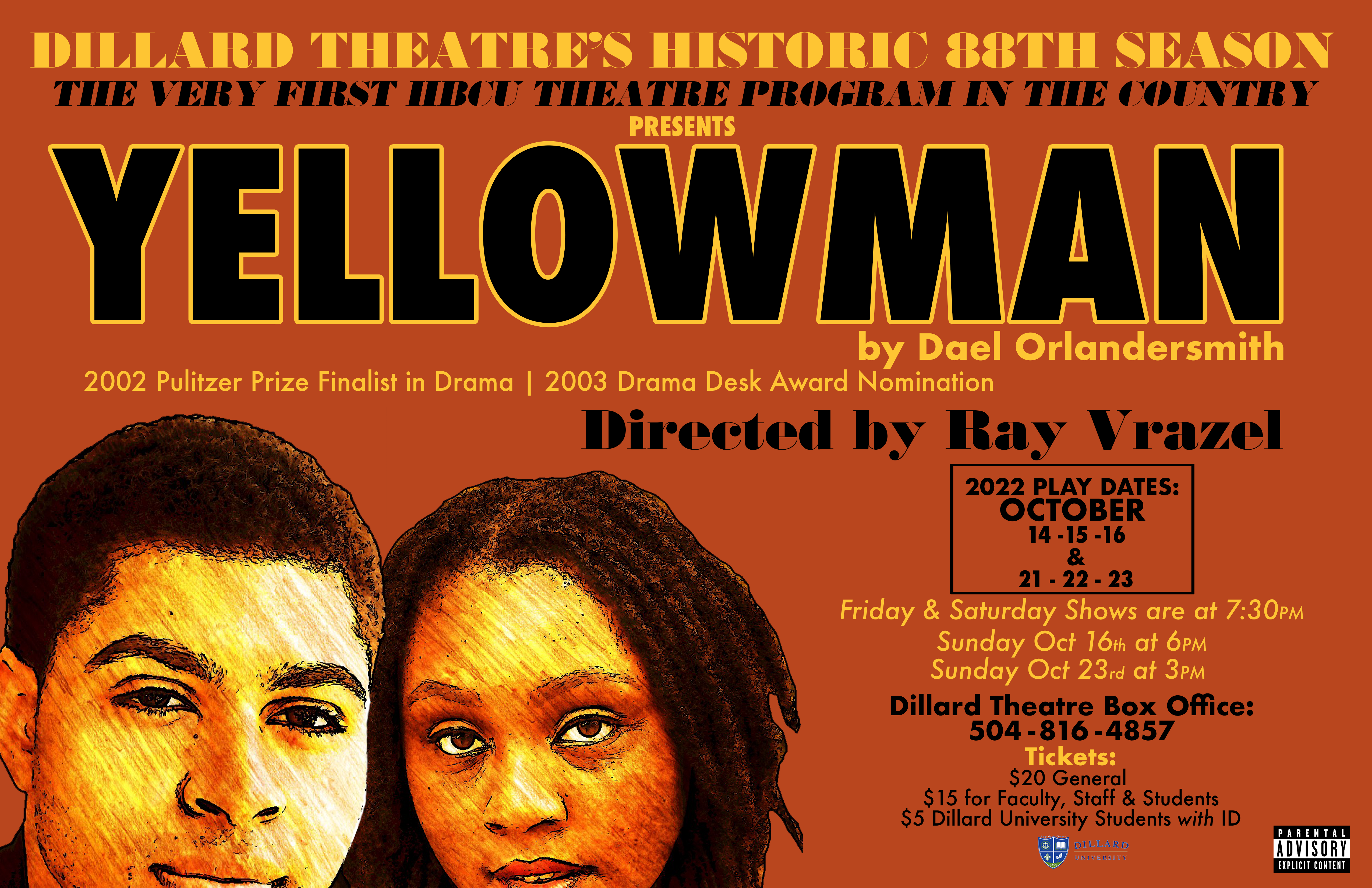 The 2002 Pulitzer Prize finalist for drama, "Yellowman" is a multi-character memory play about an African American woman who dreams of life beyond the confines of her smalltown Southern upbringing and the light-skinned African American man whose fate is tragically intertwined with hers. The play explores the negative associations surrounding male Blackness as well as the effect these racial stereotypes have on Black women. The two-actor performance (known as a two-hander) will showcase the talents of Olivia Johnson '23 and Atlantis Clay '23 who will both switch between several characters many times in virtually every scene. The play is directed by Ray Vrazel, assistant professor of theatre arts.

“Both a celebration of young love and a harrowing study of smoldering domestic violence, the play is both heartwarming and ultimately heartbreaking.” —Variety

“It’s a play worth standing for.” —Star-Ledger

Dillard Theatre is proud and excited to bring this play to our stage to showcase not only a great African American playwright, but also to showcase the exceptional talents of our theatre majors. Providing our performance and technical theatre majors with artistic challenges that will stretch their talent and expand their skills is a basic goal of our program. "Yellowman" is a play that challenges not only our performers and our design crew, but it also challenges our audience to confront a difficult but human experience.

“There is humanity within a bleak story. We find that humanity by exposing the darkness. I use language as a tool. Just the fact that the story itself is told – and hopefully well – is cause for hope.”

The Gullah/Geechie people have a strong cultural heritage full of traditional crafts, art, music and stories told in their own melodic language that is now contained mostly in the coastal islands of southern South Carolina and northern Georgia. Though they share much of the same language and culture, the people of South Carolina often refer to themselves as Gullah, where those of Georgia are often referred to as Geechie. Today, many people think of “Geechie” as a racial slur, and it is used as a derogatory term in Yellowman.

In Yellowman, the characters live in an area about 40 miles from the Atlantic coast on the shore of Lake Moultrie, a large flooded cypress swamp. St. Stephen and the more rural Russellville, where Eugene and Alma grew up, are populated by descendents of Gullah people who left the islands to seek economic opportunities further inland.

The Playwright, Dael Orlandersmith uses strong language to show how people turn hateful language on themselves and others. The characters in Yellowman use specific words to put down people based on race, gender, and status. The play deals with difficult family issues and includes complex content to tell a truthful story of the many kinds of relationships between men, women, and families.